Kingsbury Episcopi was a fitting choice for the last recital in our “Wind & Wave” series for 2014, being next door to Muchelney, the village which was famously cut off for months on end during the flooding of the Somerset Levels. So it was doubly appropriate that the recitalist on this occasion should be Matthew Owens, Organist & Master of the Choristers at Wells Cathedral, and SOCA’s honorary president. Matthew’s programme, which was purely baroque with the exception of a delightful new work of his own, ran as follows: J S Bach, completed by Wolfgang Stockmeier Fantasia in C, BWV 573; J G Walther Concerto after Albinoni; Matthew Owens Prelude on ‘Wessex’; Johann Pachelbel Choral with 9 variations: Was Gott tut, das ist wohlgetan; J S Bach Prelude and Fugue in E flat, BWV 552.

The appreciative audience of some 50 people, young and old, were afterwards regaled with a magnificent spread of homemade cakes and other refreshments, courtesy of St Martin’s team of helpers. Thanks to their generosity, the sum of £262 was donated to Somerset Flood Relief, which will further benefit from gift aid on a proportion of the total. This brings the overall total raised for Somerset Community Foundation’s flood relief fund by this year’s series of 18 organ recitals & concerts to £4,752.61. We are hugely grateful to all the organists and other musicians who took part during the year, as well as to those church communities across Somerset who played such a vital role in ho

sting all the “Wind & Wave” events. Well done everyone concerned!

Our website’s Statistics page at 8.01am this morning, showing 10K hits 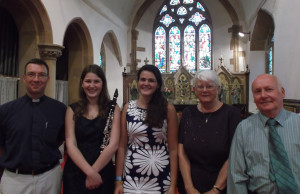 John Belcher at the Moorlinch organ