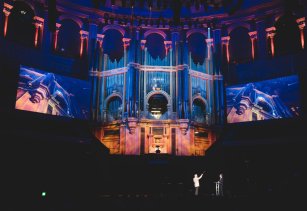 On 15th May, members of SOCA and friends took a minibus trip to London, to attend A Grand Organ Celebration. We went for the day to make the most of the visit, and the weather co-operated, providing a beautiful, warm and sunny Spring day. Members occupied themselves during the day visiting various sights, and John Crump even managed to fit in a lunch-time recital at St. George’s, Hanover Square. In the evening, we joined the four and a half thousand people in the hall for the recital, given jointly by David Briggs, Wayne Marshall and Olivier Latry. 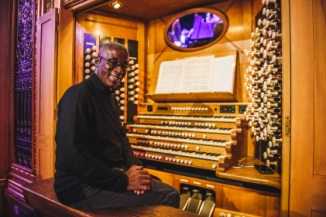 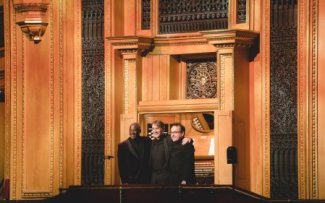 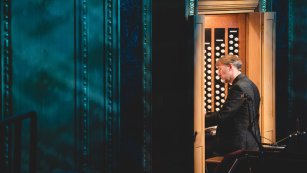 Though the programme predicted that the first item would be Bach’s Dorian Toccata and Fugue, Wayne Marshall played the other D Minor Toccata and Fugue. From a personal angle, I was disappointed, since the Dorian Toccata is a much finer piece, and its construction would have displayed the organ’s capacity to match choruses from different manuals. The piece we heard, however, had obviously been chosen for its impact, and didn’t disappoint. The opening diminished chords held over a pedal D, played on full organ, demonstrated just how much power was available.

There were giant screens either side of the instrument, showing close-ups of the console, and the players at work. After the first item, Tom Daggett, the M.C. for the evening, invited Michael Broadway, who maintains the instrument, to give the audience an idea of its interior. He went inside the organ, with a cameraman, and gave a conducted tour, while Wayne Marshall demonstrated some of the sounds available. Chris Broadway’s appearance in the central arch, as in the photograph, gives an idea of the physical size of the organ.

Wayne Marshall then played Liszt’s Fantasia on B.A.C.H., manoeuvring his way through its difficulties with almost arrogant ease, and giving an idea of the contrasts of sound on offer. His place at the console was taken by Olivier Latry, principal organist of Notre Dame. He played Mozart’s F minor Fantasia with consummate musicianship, and with dazzlingly nimble pedalwork. This piece allowed us to hear some softer flute and string sounds, as well as the grandeur of the fuller organ. He followed this with Thalben-Ball’s Pedal Fantasia on a Theme of Paganini: a fun piece, though as Latry admitted before he played it – “It is difficult!” Playing four notes chords with two feet is an interesting process! The first half concluded with Latry starting off Widor’s Toccata, and being joined at the console by Wayne Marshall in a kind of baton-passing exercise: David Briggs then made his first appearance, and the piece finished with all three playing at the same console.

The RAH organ is a concert instrument, and so the second half was designed to show off its capacity to be involved in orchestral music, and its ability to replace an orchestra. Wayne Marshall played “Rhapsody in Blue” on one of the two pianos on the stage, with David Briggs supplying the orchestral part on the organ. The soloist even went off-piste with some extra improvisation on Gershwin’s original. David Briggs continued with his transcription of Ravel’s “Mother Goose” suite, which gave an opportunity for us to hear an amazing range of sounds: I remember particularly the sumptuous, velvety sounds of the organ’s string choruses, very different from anything found on a church organ.

After a movement from a Ravel piano concerto, the concert ended with a remarkable joint improvisation, with Olivier Latry on the organ, and the other two players on pianos. The theme, introduced on the organ, was the opening of Beethoven’s Fifth Symphony. There followed about fifteen minutes of stupendous playing, with the theme tossed between instruments, and developed in fascinating ways: perhaps a demonstration of telepathy between three outstanding musicians.

It was a long day, but the minibus was comfortable, and took off the pressure of driving, and finding somewhere to park.

Footnote:   Earlier in the day, hundreds of schoolchildren had been in the RAH to hear the organ demonstrated: a golden opportunity to interest another generation in the organ. What are we doing about it in Somerse