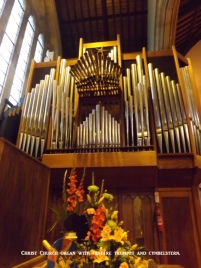 A dozen or so members of SOCA enjoyed a visit to Clifton on 13th October, where there was a chance to hear and to play 4 very different instruments. Sincere thanks are due to Derek Jones, our secretary, for working out the complex arrangements, and liaising with the churches and DoMs involved.

We began at All Saints, a church almost destroyed during a bombing raid in WWII, and rebuilt in a “brutalist” concrete style which was relieved by some colourful John Piper glass. The 60s Walker organ was rebuilt by Nicholson in 2015, when some improvements were made to the wind system, and a few judicious stop changes made the organ rather less a child of the “neo-classical” movement, though the 3rd manual is still a positive, rather than a choir organ. John Davenport and Eric Tyson, the organists, gave excellent performance with some Mozart and Vierne, after which a number of members played some Bach, Buxtehude and Duruflé among others. The balance between great and positive was first class, and lovely individual sounds blended very well. Full organ was almost overwhelming in the generous acoustic.

The group moved on to Clifton Cathedral, where we were welcomed by Stephen Bryant, organist for the last 20 years. The Rieger organ is a landmark instrument. Though there are only 26 speaking stops, each is carefully chosen, and individual stops of great beauty and character blended together perfectly in the fine acoustic. The instrument was built to a tight budget, so though the pipework and mechanical action were of the highest quality, the case is merely veneered chipboard. There are no playing aids at all apart from pedal and intermanual couplers operated by foot pedals, so all registration has to be done by moving individual stops. Stephen Bryant’s performance of the famous Bach and Widor Toccatas was all the more impressive since he did all the stop changes himself, as well as turning the pages. The instrument is ideal for playing Baroque music, where stop changing is usually minimal during the performance of a piece.

The third venue, Clifton College Chapel, houses a fine Harrison organ, just over a century old, which was ably demonstrated by James Drinkwater, the chapel organist, and Romain Bornes, a lower VI student, playing Mozart, Bach and Langlais. In 2017, the organ was enhanced by the addition of a bottom octave to the 16’ reed, giving a full-length 32’ Double Ophicleide. The sound of this was less fearsome than the name might indicate, giving a deep, purring growl, rather than suggesting a WWI artillery bombardment! The stop was partly financed by a bequest from the estate of the late David Willcocks, a former student. SOCA members played mainly Romantic music, including Mendelssohn and Walton, very much enjoying the comfortable console and the rich sounds in the magnificence of the college chapel.

Finally, we moved to Christ Church, a large Victorian building, where the 3-manual organ of rather mixed parentage was finally re-built and refined by David Wells in 2001. This was perhaps the loudest instrument of the day, with heavy reeds and a fanfare trumpet. It was also the only instrument of the day with a detached console. Adrian Sawyer, the organist, introduced the organ and played some romantic music to show the range of colour and power available, and members were then free to play.

This was a most enjoyable day, with 4 very different but fine organs within a few hundred yards of each other. The resident players were most hospitable, giving out detailed specifications of their instruments. Thanks must go again to Derek for his painstaking organisation.